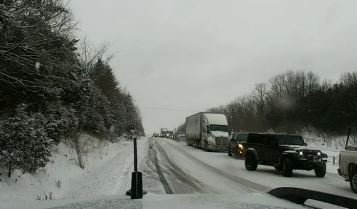 Missouri State Highway Patrol troopers in central Missouri have been dispatched in only one crash on state highways since the storm began.

that of the patrol Troop F said on Twitter by 2 p.m., soldiers had worked only one crash with injuries, but had received 103 calls since 6 a.m., with 56 drivers stranded and 20 crashes without injuries. The only accident with injuries occurred around 7:30 a.m. on Interstate 70 in Callaway County, according to an online accident report from a patrol. A 22-year-old Montgomery City woman was slightly injured when her car left the road and crashed into a ditch.

The Missouri Department of Transportation reported that all major state highways in central Missouri were covered. About an additional inch of ice and 3 inches of snow were measured in Colombia Thursday afternoon. More snow was expected later in the day.

MoDOT also reported around 2:30 p.m. that the westbound lanes of I-70 near Midway had reopened.

Traffic was not moving around 2 p.m. The Missouri Department of Transportation’s travel information map said the closure could last an hour and began around 1:30 p.m.

The City of Columbia is asking motorists not to park on snow-covered priority roads.

Drivers are asked to move their vehicles from the first and second priority routes to allow snowplow truck drivers to pass through these areas. The city identifies priority snow routes with red, white or blue signs.

Drivers risk being ticketed and towed at their own expense if their vehicles are not removed from these areas.

The Columbia Police Department is also operating under its Delayed Accident Report Protocol.

Due to the current snowfall and slippery road conditions, @ColumbiaPD has implemented the delayed incident report protocol. If you are involved in a minor vehicle accident without INJURY, please exchange information and report it online. However, if there are injuries, call 911 anyway.

Police are asking drivers involved in minor accidents without injuries to exchange information and report the accident online.

Outbound American Airlines flights at Columbia Regional Airport were canceled Thursday and Columbia city buses were not operating as continued snowfall covered a layer of sleet and ice already on the ground.

Go COMO, the city of Columbia’s bus service, announced Thursday morning that it will be canceling its routes for the rest of the day.

And emergency dispatchers said a disabled vehicle near Sorrels Overpass in Colombia was slowing traffic on westbound Interstate 70. Details of the incident were not immediately available, but a traffic camera showed stationary vehicles in the westbound lanes.

The Missouri State Highway Patrol responds to an accident Thursday morning on Interstate 70 in Cooper County.

Troopers said the crash occurred in the westbound lanes near Mile 91. Injuries were also reported, but specific conditions were not immediately available, according to a Highway Patrol Twitter post. .

State Troopers are en route to a multi-vehicle accident with injuries blocking the roadway on I-70 westbound at the 91-mile marker in Cooper County.

Please avoid the area and find an alternate route. pic.twitter.com/rEIxdHU8DT

MoDOT reported at 9:30 a.m. that drivers should expect to find delays in westbound lanes for the next hour.

MU Health Care says it is closing its clinics at 10 a.m. Thursday due to travel conditions. Roads remain covered in ice around the area.

Troop F Troops from the Missouri State Highway Patrol, which covers much of central Missouri, had received 19 calls around 8 a.m. Thursday as ice and snow continued to fall.

The agency said the soldiers helped nine stranded drivers and worked on six accidents. The Missouri Department of Transportation’s traveler map showed state roads around the area were covered, including major thoroughfares such as Interstate 70, Highway 63 and Highway 54.

Sleet was falling on Columbia around 8 a.m. and starting to turn to snow. The snow was expected to last until the afternoon.

Parts of central Missouri, including Boone, Howard and Randolph counties, remained under a winter storm warning through 9 p.m. Thursday, with up to 8 inches of snow expected above the ice sheet already covering the ground.

A 35-member team from Columbia Public Works was working Thursday morning to help make the roads easier to drive on. These crews will focus on the city’s priority roads amid expected heavy snowfall, according to a news release.

Parts of Interstate 70, Highway 63, Highway 54 and other roads are covered in ice and snow, according to the department’s Traveler Information Map website.

A freezing winter mix has started to fall in the last 15 minutes or so here at Moberly. Going down fairly steadily now. #ABC17News pic.twitter.com/BAWBplRZJI

An ABC 17 News crew in Moberly reported that a wintry mix began to fall in the city around 7:30 a.m.

At least one flight to Columbia Regional Airport was canceled Thursday. The airport spokesperson could not confirm whether the cancellation was weather-related.

At around 5:25 a.m., the MoDOT Traveler Information Map website showed the highway was partly covered in ice and snow. MoDOT also reported poor road conditions on Highway 36 in and around Macon.

No snow yet here in Mid-Mo, but that’s not stopping snow removal crews from heading out early this morning. See crews at Sturgeon already on their way to Moberly. Plug into @ABC17News at 5 for the latest updates on winter weather in our area. pic.twitter.com/K9CSrCHGgF

The Boone County Roads and Bridges Department told ABC 17 News that a seven-person crew was pre-treating the roads with salt Thursday morning. Another team of 24 people should start work at 7 a.m.

You can find a list of all closures and delays here.