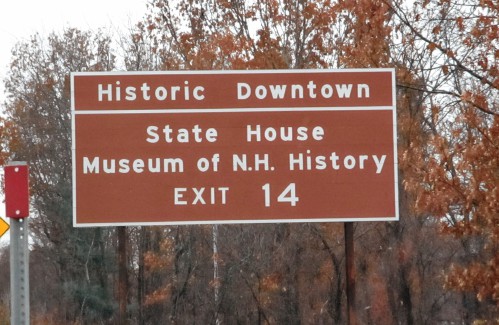 For those who are keen observers of the signage on Interstate 93, rest assured that downtown Concord is still historic and the Museum of New Hampshire History still exists.

They are simply no longer on the State House signs at Exit 14.

Welcome to the more complicated world of road signs than you might think, where the overriding authority of the Federal Uniform Traffic Device Handbook collides with the messy complexity of real life.

“The whole purpose is the word ‘uniform’. We try to make sure we’re consistent across the state when making changes, ”said Bill Lambert, state traffic engineer at the Department of Transportation. “But there are a lot of gray areas.”

Consider the State House signs in question, which anyone living or working at Concord has seen so many times that we have practically stopped noticing them. The two signs, each on the south and north side of Exit 14, have white letters on a brown background, which is a color (signified by the hexadecimal code # 660000) that indicates “points of recreational or cultural interest”.

This is compared to the more common signs which have a green background (hex code # 009900) and are officially called guidance signs, or the blue background (hex code # 0000FF) are “service information signs” telling you which shopping services are available near the next exit. If you are wondering, the government has also established specific uses for signs with red, purple and even neon pink backgrounds. However, authorities have yet to decide what to do with the “coral” backgrounds (# CC0033).

The wording was changed when the panels were replaced because they were at least 15 years old and needed an upgrade, Lambert said.

Although the signs are relatively small by road standards, they are much larger than they appear when you walk past – 12 feet wide and 5 feet high for the new sign, several feet taller in the two dimensions for the older, more verbose sign.

When the time for replacement came, the state traffic bureau had to decide what the new sign would and wouldn’t say. Changes in how best to alert people to what is going on have made mentions of downtown and the museum disappear, Lambert said, moving them to blue information signs about services.

“Those two are the types of tourism designation now eligible for a specific service or logo program – the blue signs – so we’ve taken them out,” Lambert said. “Of course, the State House is also a tourist destination, but it also fits the category of cultural / recreational places” suitable for brown signs.

“Shaker Village would have been on a brown sign in the past. The Audubon company in Concord was a brown one, now we have an attractions program that it belongs to,” he said.

As you can guess, making such a decision is not always easy.

“A lot of times when we’re discussing whether to pull certain things off the highway side, we reach out to stakeholders to let them know it’s on the table,” Lambert said. Chambers of commerce and tourism officials often have opinions on what they want to put forward.

It’s complicated to the point that alerting the drivers of a hamburger restaurant may require legislative action. It’s no joke: Blue signs telling people what services are available at an upcoming exit on I-93 may only mention attractions when you’re north of Concord, but the legislature changed the law to allow mention of upcoming food, gas, accommodation or camping facilities when you’re south of Concord, probably because the less pristine surroundings won’t be marred by that extra commercialism.

Virtually all of New Hampshire’s major interchanges and highway signs are made from one foot wide aluminum planks, cut to length and bolted together, then covered with reflective foil and separate reflective border and words. The work is done either through private contracts or the DOT sign store on Route 106, Lambert said.

By the way, these aluminum panels come in handy.

“When we take panels apart, some patrol sheds will use the panels as shelves or ramps to get the mowers onto the trailers, things like that,” Lambert said.

The coatings are also interesting. They have tiny built-in prisms to mirror the headlights.

“The old material had glass beads, but now it’s prismatic, which means the light returns to the source at a wider angle so you can see the brightness at a wider angle and side to side. the other, ”Lambert said.

Despite the importance of road signs in our car-centric life, Lambert said the office doesn’t get a lot of complaints or suggestions from the public – maybe, he says, because everyone uses their phones to figure out how to get around these days. This contrasts with another type of road sign, he said.

“Speed ​​limits! There are a lot of self-proclaimed speed limit experts out there,” he said.

(David Brooks can be reached at 369-3313 or [email protected] or on Twitter @GraniteGeek.)

The complex history of the American highway system