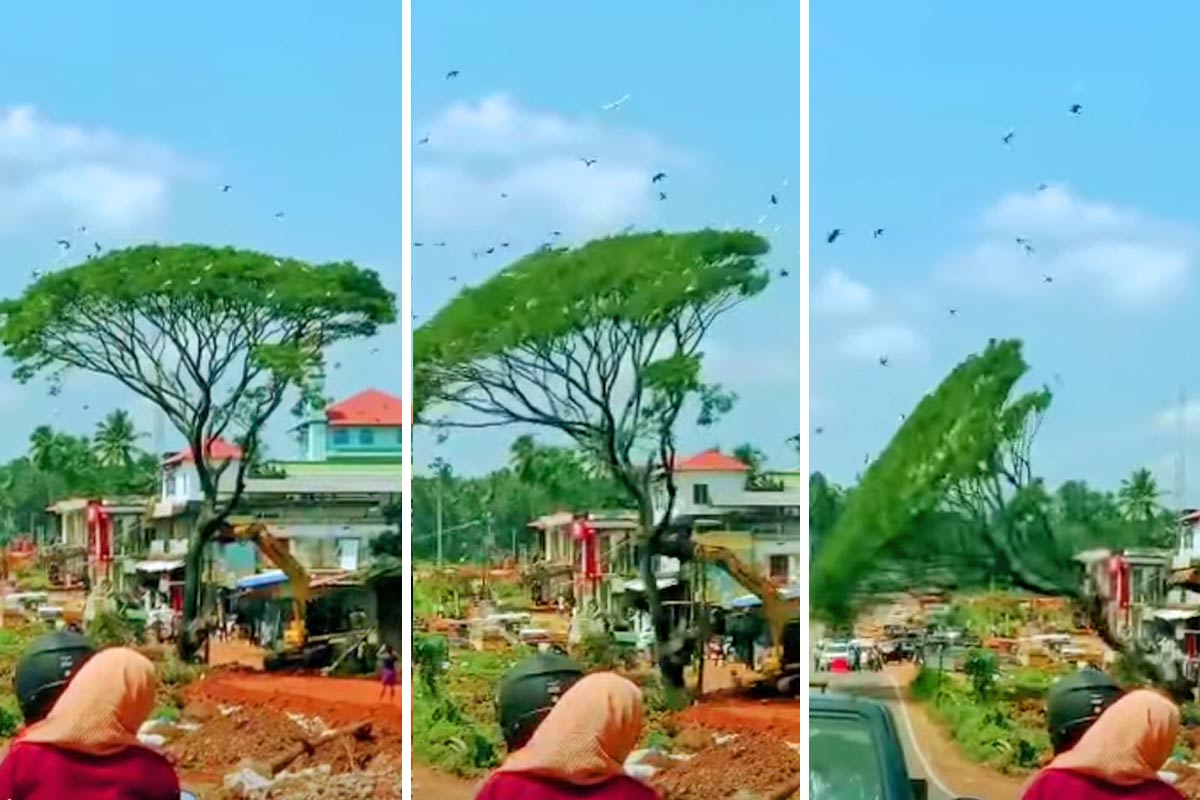 Malappuram has a significant presence of heron colonies. Surveys carried out with the Forestry Department established the presence of twelve species of waterbirds in the region.

A video of a decades-old tree teeming with nesting birds uprooted on National Highway 66 at Randathani in Malappuram district of Kerala had shaken the conscience of environmentalists and citizens last week. The video showed numerous birds taking off, as an earth-moving machine pushed the tree they had nested in, near a national highway development site. Migratory birds were among those affected in Randathani. Several trees like the one in the video have been marked for felling as part of a National Highway Authority of India (NHAI) highway widening initiative.

Conservationists and bird watchers have come forward to say the expansion should be put on hold until the end of the nesting season. Bird watchers say that most birds, including migratory varieties, nest and lay their eggs around the monsoon. The low temperatures and the abundance of food during the monsoon are the main reasons for this. Hatchlings take between four and five months to mature. When a nesting tree is felled, adult birds escape, while unhatched eggs and hatchlings fall to the ground and die.

Malappuram is one of the five districts in North Kerala that have a significant presence of heronry (a colony of herons). Surveys carried out with the cooperation of the Kerala Forest Department have established that twelve species of waterbirds breed in the region. According to the article “Long Term Monitoring of Heronries in North Kerala, India: A Synthesis” written by Dr. Roshnath Ramesh, a large portion of heronries are located along state and national highways. The article observes that the high density human populations in these areas make the birds prone to anthropogenic disturbance. Species that nest in the area include the near-threatened ibis (Threskiornis melanocephalus) and eastern darter (Anhinga melanogaster).

Malappuram District Heronry Survey Researcher and Coordinator Srinila KT identified the birds moved to Randathani as egrets and little cormorants. Heronries in northern Kerala are concentrated in public areas like bus stops and railway stations, observed ornithologist Manoj Karingamadathil. According to Srinila, the birds’ preference for urban public spaces is preferred due to the greater chance of avoiding predatory birds and terrestrial predators.

She explained that the sudden destruction of a regular heronry site during the nesting period will affect the population of the species. According to Manoj, “when a nesting tree is cut down, a whole batch of birds is lost. This will have micro-level impacts on the species. If the same tree had been cut two months later, this problem could have been avoided. He said such incidents occur because those undertaking development initiatives ignore the breeding cycle of birds and the legal provisions protecting them.

The Wildlife Protection Act prohibits the hunting of any wild animal except in certain cases exempted by law. The Act’s definition of hunting includes damaging or disturbing the eggs or nests of birds. The birds moved to Randathani belong to the fourth schedule of the law. Contravention of the provisions of the law is “punishable by a term of imprisonment of up to 3 [three years]or with a fine of up to 4 [twenty-five thousand rupees]or with both.

Manoj and Srinila confirmed that the birds affected at Randathani fall under the IUCN Least Concern category, reducing the impact of the incident. Even for these species, finding a new nesting site in the next breeding cycle will involve several challenges, including an increased threat from predators, Srinila added. According to her, several other Randathani trees that served as regular heronry sites had been cut down a few months ago. This could have led to more breeding pairs choosing the tree felled this week for the current season’s nesting.

Stressing the need to let young birds mature, Thomas Lawrence, CEO of the Save Wetlands International Movement (SWIM), wrote to Minister of Road Transport and Highways Nitin Gadkari on Saturday August 6. His email requested the Minister’s prompt intervention on the matter as it is understood that more trees will be felled in this area in the coming days. Speaking to TNM, Thomas said development projects such as this should be sensitive to the ecological impact they have. “The felling of trees should have been undertaken after consultation with ornithologists and other experts on the birds’ breeding patterns and other rehabilitation measures that could have been taken,” he said. But rescue and rehabilitation is no small task, Srinila warned. “If a single pair of adult birds were to have at least three to four young, with thirty such units on a tree, that would mean 120 eggs and/or hatchlings to be saved if the tree is felled. Even if an initiative rescue is undertaken, survival rates will be very low,” she added.

This is not the first time that Thomas has written to Gadkari. In 2017, he requested the minister’s intervention to remove a dyke that separated the lake system from Veli-Akkulam to Thiruvananthapuram following the construction of a bridge here by the NHAI. “I received a response within four hours. I hope the Minister will also act quickly in the current case. »

A similar incident in Buduan, Uttar Pradesh led to the arrest of three people on August 5. The Forest Department took action following the intervention of MP Maneka Gandhi in an incident where nesting birds on a tree died after it was illegally felled. The defendants were convicted under sections 4 and 10 of the Forest Conservation Act. Closer to home, in Palakkad, railway officers were arrested in October 2019, after a Gulmohar felled that housed the nests of more than 100 migratory birds. The tree was cut down as part of a project to expand the parking lot at Palakkad station.