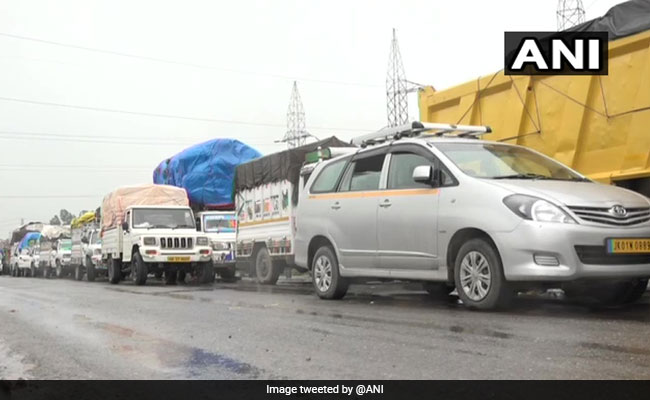 Many vehicles were stranded on the highway, which remained closed to traffic for five days. (File)

The Srinagar-Jammu National Highway was reopened on Sunday after seven days following heavy snowfall last week, even as the city and other parts of Kashmir received a new wave of snow, officials said.

The 260-kilometer-long highway – the only all-weather road connecting Kashmir with the rest of the country – was reopened to traffic on Sunday morning, officials said.

They said, however, that only one-way traffic was allowed from Jammu to Srinagar.

The highway was blocked on January 3 due to accumulation of snow and landslides and rock fire following heavy snowfall.

Many vehicles were stranded on the highway, which remained closed to traffic for five days.

The road was cleared on Friday, but only stranded vehicles were allowed to travel that day and Saturday.

However, as the weather improved and the road conditions were also better, new traffic was cleared this morning, officials said.

The Mughal Road – the alternative road link that connects the valley to the Jammu Division via the Shopian-Rajouri axis – has been closed to traffic due to heavy snowfall in the area, officials added.

Parts of the valley, including Srinagar, received another snowfall on Sunday, which briefly affected flight operations at the airport here.

Srinagar and other areas experienced fresh early morning snowfall – an unexpected period of back-to-back snowfall after light snow on Saturday and heavy snowfall earlier in the week, officials said.

They said the city recorded about an inch of snow until 8:30 am.

Some areas, especially in southern Kashmir, also received snowfall which however stopped after some time, they added.

Officials said there had been no reports of snowfall at the famous ski resort of Gulmarg in northern Kashmir and the tourist resort of Pahalgam in the south.

While the MeT office had forecast very light rain or snowfall in isolated places in Jammu and Kashmir on Saturday, there was no such forecast for Sunday.

However, he said, the weather would improve around noon on Sunday.

There is no forecast of major snowfall and the weather is expected to remain mostly dry until January 14, the MeT office said.

The fresh snowfall briefly affected air traffic to and from the Kashmir Valley, with some morning flights to Srinagar airport being delayed, officials said.

Air traffic was affected on Saturday as most flights to and from the valley were canceled due to poor visibility and bad weather following a snowfall in the morning.

However, air traffic resumed later in the afternoon.

Meanwhile, the MeT office said the minimum temperature had improved in the valley, but still stabilized below freezing.

The city of Srinagar – the summer capital of Jammu and Kashmir – recorded a low of minus 2.6 degrees Celsius – down from minus 4.0 degrees Celsius the night before, officials said.

The tourist resort of Pahalgam, which also serves as a base camp for the annual Yatra of Amarnath in southern Kashmir, recorded a low of minus 5.9 degrees Celsius.

Kashmir is currently in the grip of ‘Chillai-Kalan’ – the harshest 40-day winter period when a cold snap grips the area and the temperature drops significantly, causing the freezing of the mountains. bodies of water including the famous Dal Lake here as well as the water supply pipes in several parts of the valley.

The chances of snowfall are most frequent and highest during this period and most areas, especially in the higher parts, receive heavy snowfall.

While ” Chillai-Kalan ” – which started on December 21 – will end on January 31, the cold snap continues even after that in Kashmir with a 20 day ” Chillai-Khurd ” (little chill) and a 10-day Chillai-Bachha (baby cold).

More safety devices installed along the national road of Bicol

Award of national highway contracts to be hit by expanding Bharatmala Phase I, study…

According to the National Highway Traffic Safety Administration, road deaths in the…