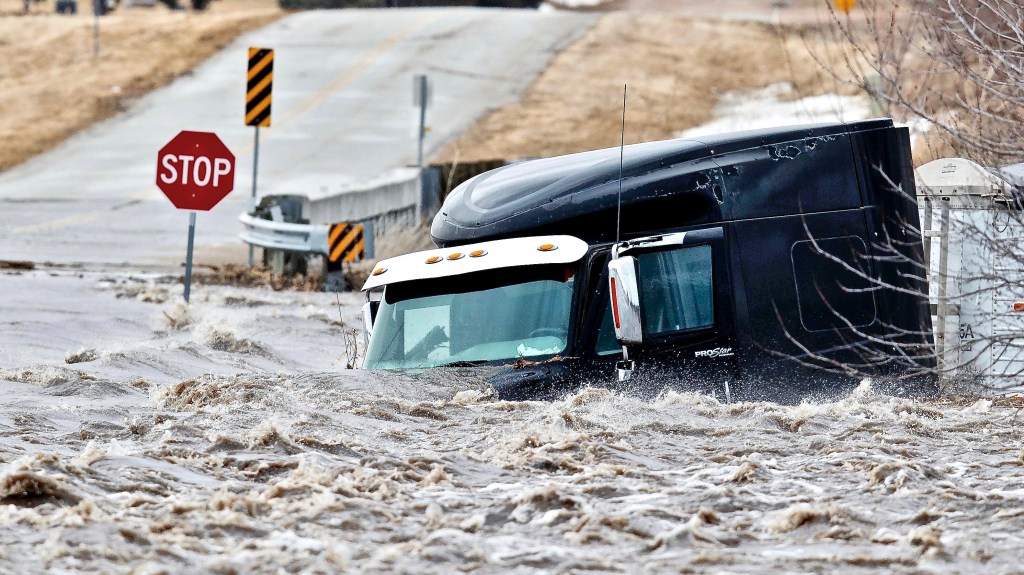 By MARGERY A. BECK and BLAKE NICHOLSON

OMAHA, Neb. (AP) – Flooding in the central United States on Friday flooded small towns, forced some residents along waterways to evacuate, threatened to temporarily shut down a nuclear power plant and shut down sections of a major river and an interstate highway, foreshadowing a difficult spring flood season.

High waters, caused by a severe late-winter storm, pushed some streams to record levels in Nebraska, South Dakota, Iowa and Minnesota. The flooding was the worst in nearly a decade in some places, although the situation is expected to improve quickly in many places over the weekend, according to Mike Gillispie, hydrologist with the National Weather Service in Sioux Falls.

But in eastern Nebraska, flooding worsened on Friday and remained a big concern in the lower Missouri area – which is a major source for the Mississippi River – with the Weather Service issuing high water warnings along the river and its tributaries from southeastern South Dakota to Saint Louis, Missouri.

About 45 miles northwest of Omaha, the town of North Bend – home to nearly 1,200 residents along the banks of the Platte River – rescuers used boats to evacuate residents. Also on Friday afternoon, authorities asked residents of Valley, home to nearly 1,900 people just west of Omaha, to evacuate. Within hours of this request, everyone who remained in the city found all access to the interior and exterior cut off by the flood waters of the Elkhorn River.

Officials in eastern Nebraska said more than 2,600 people living along the Missouri, Platte and Elkhorn rivers had been asked to evacuate as the waters crossed levees in several rural areas.

“Things are moving and changing at a rapid pace,” Douglas County Commissioner Mary Ann Borgeson said at a press conference on Friday. “We need you to follow directions and evacuate when we say you need to evacuate. “

President Donald Trump tweeted on Friday that he had spoken to Nebraska Governor Pete Ricketts about the flooding. The president also praised first responders and emergency response teams for doing “an excellent job” in the face of flooding, high winds and road closures.

Rising waters on the Missouri River also prompted Iowa officials on Friday to shut off much of Interstate 29 from the Missouri state line about 85 miles (137 kilometers) north to in approximately Missouri Valley, Iowa. The closure is reminiscent of the historic flooding along the river in 2011 that washed away segments of the freeway in western Iowa. Officials on Friday said the river is expected to peak well below what was seen in 2011.

The governor of Wisconsin declared a state of emergency on Friday as flooding worsened, and the governor of Iowa expanded an emergency proclamation issued the day before.

The U.S. Coast Guard on Friday closed all traffic on the Missouri River about 50 miles (80.5 kilometers) south of Omaha, Nebraska, downstream to St. Joseph, Missouri, for a stretch of about 70 miles (112.7 kilometers).

The Coast Guard and Corps have also called on all river vessel operators to create as little wake as possible from St. Joseph downstream to Kansas City to minimize damage to the dikes.

The US Army Corps of Engineers, which manages the river, has significantly increased releases from the Gavins Point Dam in Southeast South Dakota due to the limited storage capacity behind the dam for excess runoff. The releases are expected to exacerbate downstream flooding, although the agency has assisted with dike monitoring and other flood response measures, and halted releases from the Fort Randall Dam by upstream of Gavins Point.

The swollen Missouri threatened a nuclear power plant in southeastern Nebraska. The Nebraska Public Power District said it was likely that the Cooper nuclear power plant located about 95.5 kilometers south of Omaha would be shut down early on Saturday.

Officials are confident the flooding around the plant poses no danger to the public, Electric District spokesman Mark Becker said.

The storm also dramatically increased concerns about spring flooding in the Red River Valley in the Upper Midwest, where neighboring towns of Fargo, N.Dakota, and Moorhead, Minnesota, experienced flooding. record 10 years ago.

Since then, the two cities have implemented several measures such as home buybacks and levies. They could be tested this year. The national weather service in an updated perspective on Friday said “significant” snowmelt flooding is likely in the valley. The likelihood of the river reaching the major flood stage at Fargo has dropped from 50 percent last week to 90 percent.

The midweek storm crippled parts of Colorado and Wyoming with blizzard conditions. Thousands of homes and businesses were still without power on Friday in Colorado, mostly in the Denver area, although crews worked all day to restore power.

The storm also spawned at least three tornadoes in Michigan and Indiana on Thursday, according to the National Weather Service. There are no immediate reports of injuries, but houses and trees have been damaged and electricity has been cut to thousands of people. Flooding, hail and strong winds were also reported in parts of both states. The weather service recorded a 60 mph (97 km / h) wind gust at Indianapolis International Airport.

Could the I-70 crash suspect read the English road signs?