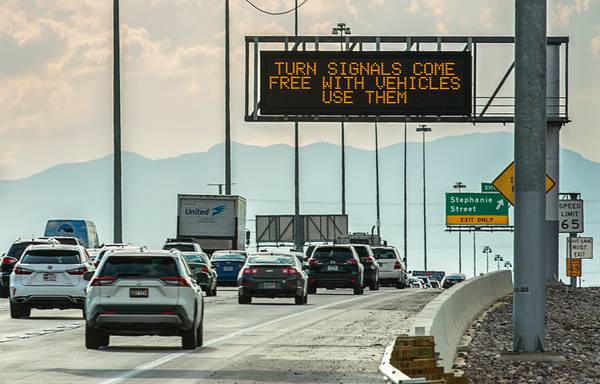 A bulletin board along the 215 Beltway near the Stephanie Street exit uses a bit of humor to encourage safe driver behavior. The Nevada Department of Transportation is using similar signs on state highways as part of its latest public safety effort.

Witty slogans on Las Vegas freeway signs can be laughed at, but the hope is they save lives, too, transportation officials said.

Slogans began appearing last week on electronic billboards on Nevada highways: “It’s the temperature, not the speed limit,” “Camp in the mountains, not the left lane” and “The turn signals are free with vehicles. Use them. “

Last year, the Nevada Department of Transportation asked drivers to submit entries for fun messages to be displayed on some 400 NDOT signs, spokeswoman Adrienne Packer said. In Las Vegas, the messages were posted on signs on Interstate 15, 215 Beltway, and US 95.

The department received nearly 1,000 submissions, and an NDOT committee narrowed them down to 11 finalists. The public selected the winners.

Slogans are a humorous way to remind Nevada residents of safe driving practices, and signs can be changed instantly to convey more urgent information, such as traffic delays or an accident.

The slogans were due to debut last year, but the campaign was delayed so that the signs could be used to promote COVID-19 masking and vaccinations, Packer said.

The signs are also making the rounds on social networks. Twitter account @NoContextVegas recently posted a photo of one of the panels and got nearly 600 retweets and over 4,100 likes.

Humor is an effective way to reach people, said Erin Breen, director of the UNLV Road Equity Alliance project. And when a campaign gets results on social media – especially among younger users – it could potentially save lives, she said.

“To put it bluntly, these are the people we want to reach, especially young men,” Breen said. “We are looking at the population aged 16 to 34, and they are the most at risk. “

Last year, 315 people were killed in traffic crashes in Nevada, and speed was a factor in about 35% of those wrecks, according to NDOT. Over 90% of crashes nationwide are caused by driver behavior, such as speeding or driving while impaired, distracted or reckless.

Andrew Bennett, spokesperson for the Nevada Road Safety Bureau, said the signs could get people talking about road safety.

“These signs and messages are shared and create a conversation,” Bennett said. “Short, memorable things sell.”

Marla Stafford, professor of marketing at UNLV, said she noticed the signs and showed them to students as an example of an effective public campaign.

“They’re pretty humorous and they grab your attention, which is the first step in any advertising,” said Stafford, dean of Hospitality College at UNLV.