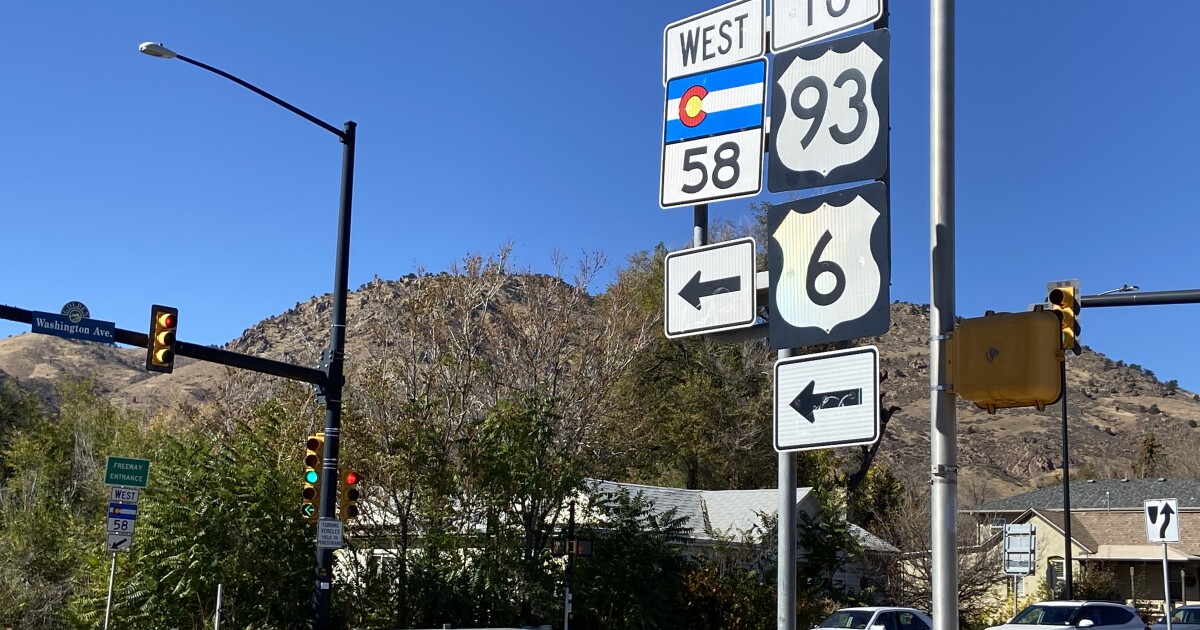 Chris from Denver writes, “What drives you crazy?” Did the CDOT mess up the sign for the I-70 Watkins exit? They used the “regular” iconology of Interstate 70 (multicolor) versus commercial I-70 iconology (green and white) on one sign. I can imagine that more than one trucker was troubled by this. Also, in Golden on Washington Street at Highway 58, there is a US Highway sign designation (black and white) for CO 93 (State Highway). I don’t think 93 was ever a federal highway.

The short answer, Chris, is yes. The Colorado Department of Transportation messed up both signs, but some of the signs on I-70 are wrong in additional and different ways.

From Golden with State Highway 93 sign. CDOT Region 1 Traffic Operations Engineer Ben Kiene confirmed “This is supposed to show SH 93, not US 93. We’ll fix it.”

“Technically, you could possibly drive from Golden to US 93, which runs through Nevada where US 6 meets it,” Kiene explained.

The southern point of US 93 begins in Wickenburg, Arizona, northwest of Phoenix. From there, US 93 runs north to and past the Canada-US border. It passes through major cities like Kingman, Arizona; Las Vegas and Ely, Nevada; Twin Falls, Idaho; and Missoula and Kalispell, Montana, before terminating in the United States at the Canadian border.

According to Matthew Salek of The Highways Of Colorado website, Colorado State Highway 93 is an original state highway from the 1920s. It originally ran from Morrison north along the donkey road to Golden. It was paved over in 1939, and the same year it was extended north to Marshall – the small town just south of Boulder.

Regarding the I-70 sign near Watkins, the problem Chris describes is with the sign just before exit 295 on the west side of I-70. Yes, this sign shows the red, white and blue shield rather than the green trade route sign.

The other problem in this area is that where there are commercial signs, they indicate that a small section of road north of I-70 is a commercial loop rather than a spur.

“As well, there appears to have been some confusion in the layout or construction of the Watkins panels, which should be green ‘spur’ markers,” Kiene said.

This I-70 business spur is a very short segment of road between I-70 and State Highway 36 (Colfax Avenue) just north of I-70. The route is only signposted at both exit ramps from I-70 eastbound or westbound at Mile 295. Both signs refer to the commercial route as a loop instead of what they should be – a branch.

You might be wondering what the difference is between a trade route and a spur. The American Association of State Highway and Transportation Officials defines a commercial route as “a route primarily within the commercial boundaries of a city that provides the traveling public with the opportunity to travel through that city, passing through the commercial portion from the city and connects the regular numbered road across the city limits.

A commercial spur has one end—not both—running from the parent highway to another highway or road within the urban area. Trade routes and branch lines are meant to be marked with a white-on-green shield – different from the standard tricolor interstate shield.

CDOT tells me they will eventually replace the Watkins loop panels with spur panels. If you see anything wrong with a sign or road, you can report it to me or directly to CDOT and use their interactive site to access a form on their website.

Denver7 traffic anchor Jayson Luber said he’s been covering Denver subway traffic since Ben-Hur was driving a tank. (We think the real number is over 25.) He’s obsessed with letting viewers know what’s going on with their player and how best to avoid any issues that arise. Follow him on Facebook, Twitter or Instagram or listen to his Driving You Crazy podcast on iTunes, Stitcher, Google Play or Podbean.

Highway Patrol to crack down on aggressive driving