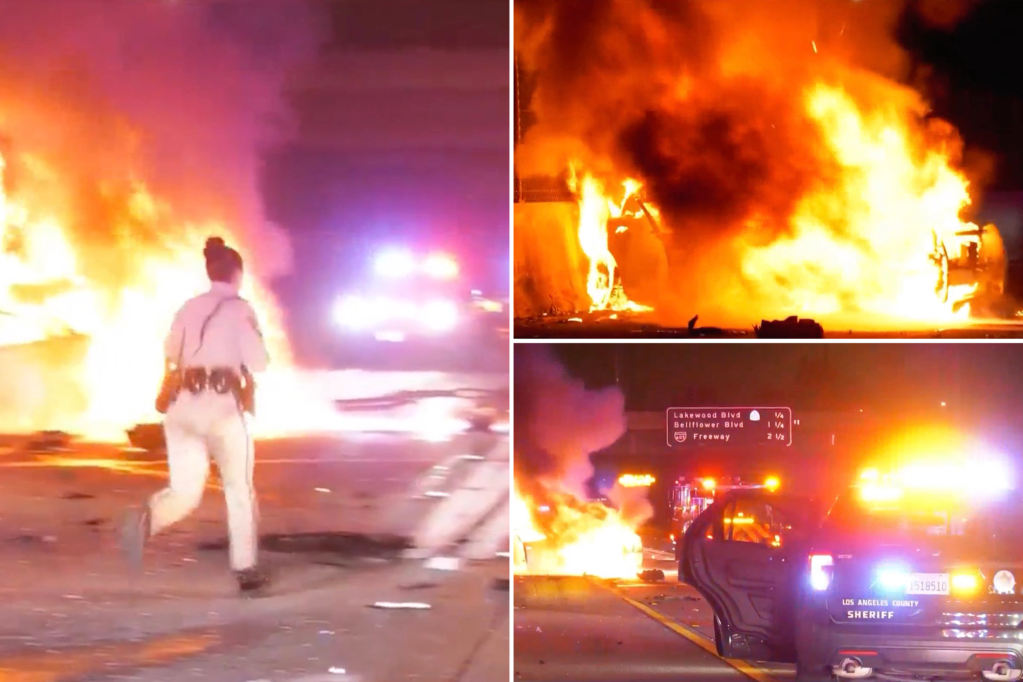 Three California Highway Patrol officers were injured early Thursday at the scene of an accident in the Los Angeles area when their patrol car was rammed by a vehicle and caught fire, authorities said.

Dramatic video captured the fireball that consumed the police cruiser on Interstate 105 near Lakewood Boulevard in Downey around 1:30 a.m., CBS Los Angeles reported.

The CHP patrol car was struck while stopped in the eastbound lane as officers directed traffic to the scene of an accident that occurred approximately 90 minutes earlier.

A police officer who was standing outside the police cruiser reportedly suffered serious injuries but was expected to survive, while two other officers – a male and a female – who were seated inside suffered moderate injuries.

All three were transported to St. Francis Medical Center in Lynwood, the outlet reported.

A woman who was driving the vehicle that hit the police cruiser has been arrested on suspicion of driving under the influence of intoxicants, the CBS outlet reported.

She was not immediately identified.

“CHP closed the lane with flares, the driver did not apply brakes and drove straight into the CHP car with all four wheels off the ground,” witness Robert Martinez told the station.

“That car rolled over, CHP stood on the ground. And shortly after, the CHP car caught fire,” he added.

Footage showed the burning wreckage of the cruiser on the side of the highway. The SUV with heavy front damage was pulled over nearby.

A CHP spokesperson told the Post that they have not yet received an update on the crash scene.